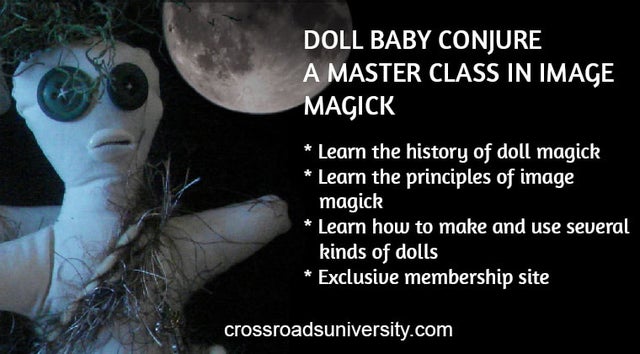 The course "Doll Baby Conjure" has been upgraded to a Master Class! Learn Doll Baby Conjure from a foremost authority on the subject on image magic. The author of four books on doll magic and ritual, author and website owner Denise Alvarado has developed this exclusive course for people interested in learning about the history of doll magic across cultures and learning how to make dolls and use them in a ritual context. There is a special emphasis on the use of doll babies in Southern Conjure, Hoodoo and New Orleans Voodoo.

For centuries, people have been using the ancient techniques of image magick, contagious magick, and sympathetic magick in combination with a doll or effigy to manipulate all aspects of one’s relationships with people, places, and things. In the past in Old New Orleans, Voodoo dolls were referred to as fetiches by outsiders because they roughly resembled the magickal fetiches brought from Africa by African slaves. Since Voodoo dolls are traditionally constructed from objects belonging to the natural world, such as sticks, moss, herbs, roots, and stones, it makes sense to believe that the doll itself has Spirit, that it is part of the One Creator, just as people are. Even throughout European history, philosophers such as Plato and Aristotle contemplated the possibility that souls exist in animals, plants, and people.

Doll baby conjure is a type of remote control magick, if you will, because it involves influencing people, places and things via a ritually charged object fashioned most commonly in human form. While doll babies and Voodoo dolls are most commonly known to lay people as objects used for harming and revenge, they are actually used for many different purposes. As you take this course, you will discover that working with dolls goes far beyond sticking pins in them for revenge.

Doll Baby Conjure: A Master Class in Image Magick includes expanded lessons delivered via an exclusive website with multimedia presentations and digital downloads. This course is taught by the website owner and author of the The Voodoo Doll Spellbook and Voodoo Dolls in Magick and Ritual, and opens in October 2022. Follow @crossroadsu on Twitter for updates.

﻿If this class is sold out, please go to crossroadsuniversity.com to register.