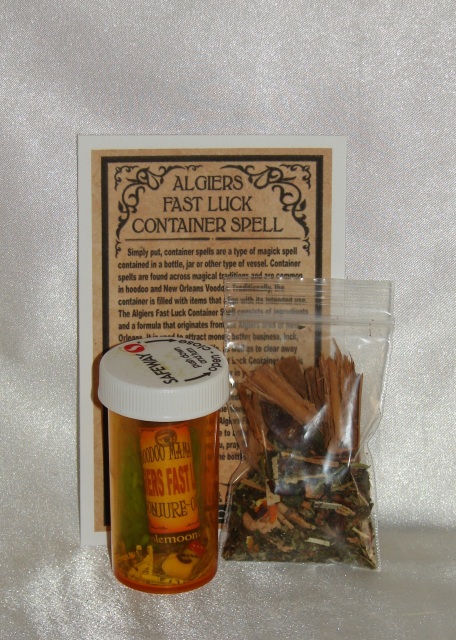 SKU: FLCS13
$14.95
$13.00
$13.00
On Sale
Unavailable
per item
Simply put, container spells are a type of magick spell contained in a bottle or jar. Container spells are found across magical traditions and bottle spells are particularly common in hoodoo. Traditionally, the bottle is filled with items that aligns with its intended use. For example, if the spell is intended to protect the home, it is filled with rosemary, pins and needles, and red wine. It is then buried at the farthest corner of the property, beneath the house hearth, or placed in an inconspicuous spot in the house. It is believed that after being buried, the bottle captures evil and impales it with the pins and needles, drowns it by the wine, and sends it away by the rosemary. The bottle spell is believed to be active as long as the bottle remains hidden and unbroken.

This container spell is a medicine bottle that you fill with a variety of money and luck drawing qualities consistent with the Algiers Fast Luck formula. Fast Luck is a term referring to a type of work straight from the Algiers New Orleans Voodoo hoodoo tradition. It is used to attract money, better business, good luck, love, and the better things of life, as well as to remove negativity and clear away obstacles. This Fast Luck Container Spell is perfect for carrying in the pocket or in your purse where it is right on hand to shake it up a few times whenever you want to activate it. Comes with the bottle, a bag of herbs and curios and a small bottle of Algiers Fast Luck Oil.

Algiers is a region in New Orleans on the west of the Mississippi, or the "Westbank" as the locals call it. The most one usually hears about Algiers amongst the conjure community on the internet is the infamous Fast Luck formula that comes from commercialized hoodoo. But, you might be surprised to know so much of the history of Algiers is relevant to the evolution of Creole Voodoo and New Orleans culture in general. For that matter, it has had a significant impact on world culture, as well.

Algiers is considered by many to be a sacred place for several reasons. It is the second oldest area of New Orleans (1719) and was the place where slaves were held until they were recovered enough from the trip across the waters (if they survived) to be transferred across the Mississippi to New Orleans proper where they were sold. In addition to being a holding place for African slaves, it was also a holding place for the Acadians expelled from Nova Scotia by the British during the forced removal  - essentially ethnic cleansing of Nova Scotia -  called the Le Grand Dérangement (the Great Expulsion). The British did not deport the Acadians to Louisiana, however; they were first sent to France and other places such as the French Guiana, the Falkland Islands, as well as San Domingo (Haiti). Then, under the influence of the French politician and author Henri Peyroux de la Coudreniere, those who were in France were sent to Louisiana. During the Haitian revolution, many Acadians fled to New Orleans along with the African and African descended populations. Louisiana was under Spanish rule at the time and France and Spain were on good terms with a significant commonality being the Catholic Church. Subsequently, many of the Acadians settled along the Mississippi and in particular along the Atchafalaya Basin where they reestablished their Acadian culture. Over a period of time, the word Acadian evolved to Cadien and then to Cajun by locals. This is merely a thumbnail description of a highly complex time in Louisiana history.

It is from the Acadian culture that we find the traiteurs, a type of faith healer. Some have referred to Marie Laveaux as a traiteur as she was known to pray for and heal the sick without the use of gris gris and the Voodoo charms she is most noted for. While she undoubtedly employed prayer in her cures, she was not Acadian. Rather, she was Creole.

Algiers was the site of the King's plantation, one of the largest ever that stretched all along the West bank of the Mississippi. It is believed that this is where jazz was born; and the unique call and response characteristics found in New Orleans second line rhythms were developed as a means of communication between family members separated in slavery, as well as coping with the traumas associated with enslavement. In my opinion, the best example of this raw and basic form of jazz is found among the Mardi Gras Indians, which I have written about in the Voodoo Hoodoo Spellbook and elsewhere.

Because of the prevalence of original peoples that resided here (Native Americans and Africans) and the history associated with the People (both slaughtered and enslaved), and the eventual intermingling of the two races (i.e. black Indians and Creoles of color), there is a wealth of what I call "original knowledge" that comes from this area that is unique to Algiers, New Orleans, and that is not found in other areas where hoodoo is found.

The spiritual and religious systems of the slaves had to go underground once they arrived on these shores due to the Louisiana Black Code, and poverty, a new environment, and the new relationships forged with local Indians and Cajuns resulted new formulas for various treatments (root doctoring and faith healing) emerged. These further changed when the Hoodoo drug stores came about and started catering to black folk and even more change occurred with the influence of the French perfumers, whose formulas were emulated and integrated into commercial Hoodoo formulary. All of these influences and more can be found in many of the more contemporary formulas and practices.

An example of a Gambler's Luck formula unique to Algiers could include ground carnation petals, sandalwood, cinnamon, sugar and sassafras. There is no patchouli, wintergreen or vanilla in this powder as there is in Algiers Fast Luck formulas; though, there may indeed be a hoodoo somewhere who added it if some of the other ingredients weren't available. One can see from this recipe that even the poorest of people could derive a powder from this formula of ground carnation petals, cinnamon and sugar and still have a great gambling luck and money drawing powder. Sawdust could be used as a basis for some powders since there was a saw mill there that employed a lot of folks. Carnations are everywhere in Louisiana and so are a readily available ingredient and is an example of how one can identify regional origins of certain formulas.

Another use for sawdust we find in New Orleans is for stuffing doll babies. Vintage doll babies from the area can be found stuffed with sawdust, sometimes with slits down the back where petition papers and taglocks were placed.