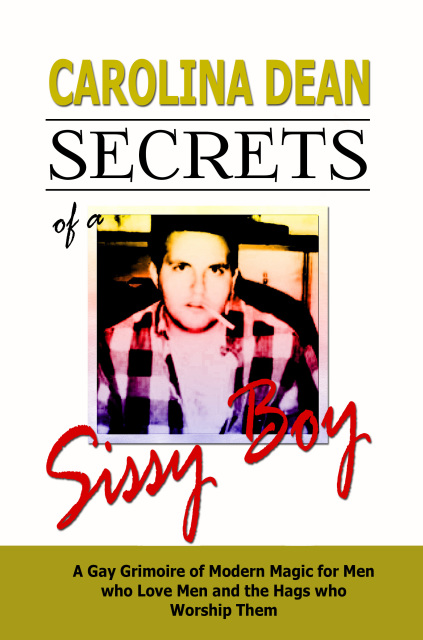 Secrets of a Sissy Boy: A Gay Grimoire of Modern Magic for Men who Love Men and the Hags who Worship Them

SKU: CDSB1995
$19.95
$19.95
Unavailable
per item
By Carolina Dean. If you think being gay is difficult in this still evolving world, try being a gay witch. The author shares a brutally honest depiction of what it was like to be bullied as a youth to the point of suicide, and his rise from the depths of despair to an empowered, powerful, and successful gay witch. A heartbreaking, as well as heartwarming account of the role of witchcraft and hoodoo in the life of  Carolina Dean, Secrets of a Sissy Boy describes some of the author's most powerful secrets for seducing straight men, controlling lovers, eliminating rivals, and when necessary, how to remove a man's nature and MORE!

Read an excerpt from this groundbreaking book below.

Secrets of a sissy boy: A Gay Grimoire of Modern Magic for Men Who Love Men and the Hags Who Worship Them

By Carolina Dean
​Introduction
Magic has always been a part of my life, even before I knew very much about it, how it works, or how to do it. However, I credit the idea of, belief in, and practice of magic with me being the person that I am today - which is a far cry from who I used to be. As hard as it may seem, I was a shy, lonely boy who was different. I knew I was different, but I never felt safe giving a name that described how I was different. My peers knew I was different, too. Unfortunately, they didn't mind giving a name to that thing that made me different from everyone else. Sissy, faggot, homo.......not a day went by that someone at some point didn't feel the need to remind me how I was different from the other boys.

My only reprieve was that there were other people in school who were different, too (but different in a different way); so, when I wasn't the target of bullying, someone else was. Nonetheless, those times were few and far between. It made my life hell. As a freshman in high school, when many teens are discovering themselves as sexual beings, I became a regular target of the other boys for my perceived homosexuality. Even though deep down inside I knew they were right about me, I wasn't ready to admit it to myself, let alone anyone else.

Having inherited my love of reading from my mother, I often retreated from the harsh cruelties of the world into my own fantasy world through books. Whereas my mother read romance novels, I leaned toward fantasy fiction. As I grew older and my interest in the occult became more prevalent, I began reading about ghosts, witches, and vampires. I became intrigued with the idea of becoming a vampire myself. I believed that if I was a vampire then I would have the power to make the bullies stop hurting me. I believed I would have the power to hurt them and that I could make the boys that I liked, like me in return. Later, I would turn to witchcraft for the same reasons.

One particularly harsh month the bullying got worse than ever. I felt like I couldn't turn to anyone. School officials either wouldn't or couldn't do anything to help and my home life wasn't ideal either.  I began to realize that my fantasy of becoming a vampire had very little chance of becoming a reality and that's when I began to entertain thoughts of suicide. I just wanted everyone to leave me alone but it seemed like the more I tried to will it to stop, the worse my situation became.

Then, one day at the library I was reading a book about vampires and came across an entry about Elizabeth Bathory. I had heard of Elizabeth Bathory before and read accounts of how she had murdered virgins and bathed in their blood to stay young and beautiful. This book mentioned the Countess' involvement with witchcraft and mentioned a charm she carried for protection. According to the story, Elizabeth carried a small leather pouch which contained an incantation written on a piece of parchment (although some accounts say it was the skin of an unbaptized baby).

And so, believing that if vampires couldn't save me, then perhaps witchcraft could. I copied the incantation down precisely as it had been written in the book. When I got back home, I stole a little leather pouch containing poker dice that my grandfather kept in a junk drawer. I snuck a candle and some matches into my room for my little ritual.

That night, I waited for everyone to go asleep and then I lit the candle. I read the incantation over and over several times asking God to save me from my bullies and give me the strength not to take my own life. Thinking that the spell needed something more, and recalling the power of blood, I pricked my finger and drew a pentagram over the prayer in my own blood and then folded up the paper with a bit of my own hair inside of it. I tucked the paper in the little leather pouch and asked God to keep me safe at least until my birthday which was just a few weeks away. Somehow I believed that if I could just stay alive until my birthday everything would be all right.

Even as I write these words I cannot remember exactly what occurred in the days after I made my little mojo bag (and I know that technically it wasn't a real mojo bag). I don't recall if the bullying eased up or I got stronger or perhaps a little of both All I know is that something changed for the better.  This was one of my earliest experiences practicing successful magic. It was this spell that taught me that not only do words hurt, but they can also heal and empower you as well. Perhaps this was one of the reasons that I became less and less of a visual artist and more and more a writer…in order to harness the power of words.

*Excerpt copyright 2016 Carolina Dean, All rights reserved wordwide.
Do you wonder what else is inside this groundbreaking book? Take a look at the Table of Contents Below!
​
Table of Contents
The Power of Positive Sex
The Ethics of Love/Sex Magic
The Secret to Healing
Of Lovers and Labels
Life and Death, Death and Rebirth
Retrain Your Brain
A Honey Jar for Self Esteem
Self Blessing
Sexual Healing: Restoring Lost Nature
Let Go and Let God
To Assuage Grief over a Deceased Love
Spiritual Check Ups
How to Perform a Spiritual Checkup
The Egg Roll: A Rite of Spiritual Cleansing
The Secret of the Ancestors
The Ancestor Altar
Working with the Ancestors
The Ancestor Pot
Gay Teens and Suicides
A Ritual To Uplift the Spirits of Gay Suicides
On Coming Out
A Ritual to Mark the Occasion of Your Coming Out
The Secret to Love
Unblocking Love: The Seven Insights
Hey, Don’t Look Me Over
New Love Honey Jar
Adam and Steve” Trio Mojo Hand for Love
Moving Candle Spell to Draw a Lover Closer
Devotion Potion
Aiguillette: The Love Knot
The Nation Sack
Follow Me Boy Spells
The Secret to Sex
Louisiana Sex Magic
How to Be a Fisher of Men
Buddha Had Me Like
Hanky Panky: A Fetish for Fetishes
To Stir Lust in a Man … or The “Boner” Charm
Sex-Magic, Sigils, & Social Media Oh My!
Come to Me Candle Spell
Ganesha, Opener of the Way
The Secret to Prosperity
The Money Prayer
This Little Piggy Went to the Altar of Success and Prosperity
Securing Your Job
For a Rent Boy to Draw Trade
How to Get Your Sugar Daddy to Satisfy Your Sweet Tooth
Fowl Magic for Money and Love
Cross & Candle Spell
How to Cleanse Your Money
The Secret to Revenge
Divine Retribution Spell
Curse of the Mirror Box
Break Up Bottle
A Cursing Container Spell
To Curse a Bully
Pity that Penis Spell
The Secret to Protection
A Simple Protection Spell
Anti-Candle Magic
UnCrossing: How to Lift a Hex, Jinx, or Curse
Reverse the Curse
Box Fix Honey Jar
The Secret of Wisdom
Wisdom of the Elders