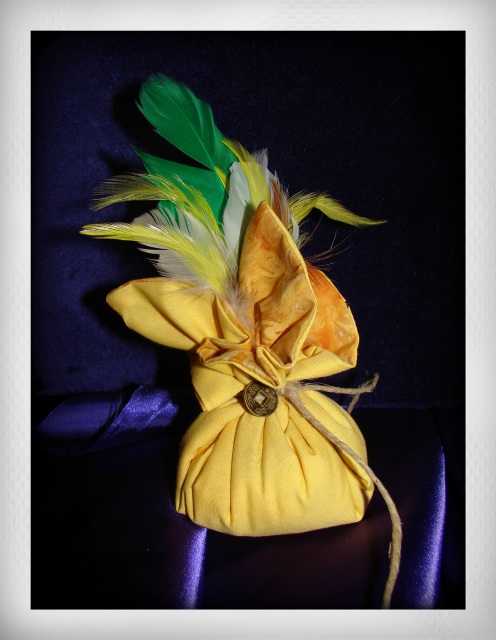 SKU: GLSCP3995
$39.95
$39.95
Unavailable
per item
Bring good luck into your life and believe you can succeed in all of your endeavors while in the presence of one our powerful Good Luck and Success Voudou Conjure Pakets. Made exclusively at Creole Moon, Voodoo Mama's Good Luck and Success Voudou Conjure Pakets are filled with strong roots, powders, herbs, seeds and other magical curios and anointed with aromatic essential oils with empowering luck and success properties.
Sold out
Add to Cart

A Conjure Paket (Paquet) or Ouanga (Wanga) Fetish is a power bundle that has been ritually prepared. Magickal herbs, soil, dirt, spices, talismans, and other items that act as power points have been wrapped and tied in a bundle to concentrate the power of a specific spirit for a specific purpose. Each ouanga is carefully created to enhance your personal connection with our beloved Voodoo Spirits.

About Creole Moon's Conjure Pakets and Ouanga Fetishes
The making of Conjure pakets (pronounced pak-kay) has a complex cosmological history. Conjure pakets were utilized during the plantation days as a means of coping with harsh life conditions, and held the dual function of harming and healing. What we call conjure pakets, mojo bags, tobies, wangas, gris gris - all of these forms of conjure fulfilled a need for maintaining some sense of control in an environment that was out of control. In particular, conjure was used as medicine as much as magic - as slaves were not given the same medical attention  as white folks and certainly weren't treated the same. Thus, the role of rootdoctor was extremely important. Typically, the women knew more of the local herbal medicine than did the white doctors and were often relied upon for  treating the illnesses of their slave owners and their families. Not all root doctors were rootworkers, however. Rootworkers are the two-headed doctors with one foot in the world of spirit and one foot in the world of the physical - and one hand in the healing and the other in the harming. No one can blame them for throwing the wanga at cruel slave owners, fixing up massa's handmade soap, and putting protections in place in a clandestine fashion.

Creole Moon's Conjure Pakets and Ouanga Fetishes are not to be confused with Haitian Vodou Wanga Paquets made by Haitian Houngans and Mambos; although, they are created to serve similar purposes. The Conjure Pakets and Ouanga Fetishes I make are based on my relationship with the New Orleans Voudou spirits and are consistent with the New Orleans Voodoo tradition. Conjure pakets contain the same magickal talismans that both Madame Laveaux, Mam’zelle Laveau and Doctor Jean Montanee drew and placed into their conjure bags, gris gris and oungas as is passed down in oral tradition along the Louisiana and Mississippi bayous. They combine the magickal powers of colors, herbs, stones, essential oils, rare powders and other magickal items and come complete with instructions.

Conjure Pakets and Wanga Paquets are not designed to be carried on a person; rather, they are kept on the altar as a point of sacred energy or can be kept anywhere in the home as sacred devotional art. Creole Moon Conjure Pakets and Ouanga Fetishes are highly fragrant and smell absolutely divine! When you walk into a room in which one of my Conjure Pakets or Wanga Paquets resides, you will immediately know you have walked into sacred space. Each is a one-of-a-kind sacred creation made especially for the person ordering it and is blessed for the specified purpose.