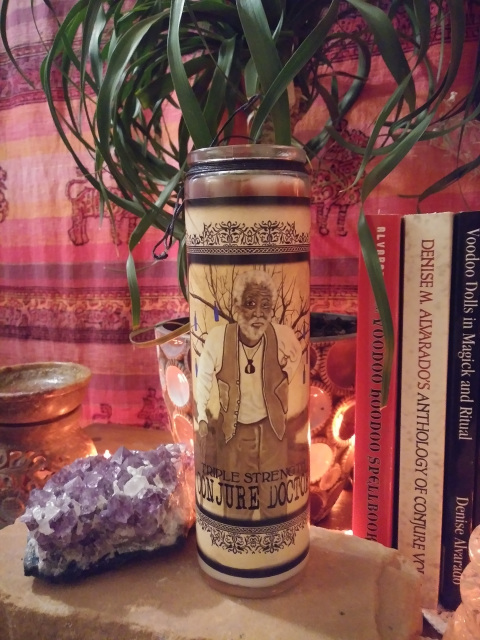 Conjure doctors are found in every rural community where their supernatural powers are implicitly believed in. The source of their power varies and is often attributed to things such as being born with a caul over one’s head, being born the seventh son or daughter of a seventh son or daughter, having learned from an elder, often well-known, conjurer, having had a divine revelation from God or having received special powers from the Spirits.

Candles are commonly burned on altars to show special devotion to a specific saint, spirit, deity, ancestor or ancestors. They are also used for performing a variety of spells, referred to as "works" in Southern rootwork. The Conjure Doctor Triple Power Fixed Conjure Candle is an all purpose candle, meaning you can use it towards any end: blessings, health, justice, revenge, love, attraction, court cases, money luck, success, protection, defense, power or domination.

These exceptional Conjure Doctor Triple Power Fixed Conjure Candles bear my custom artwork of the original conjure doctor at the Crossroads. Conjure Doctor Triple Power Fixed Conjure Candles are super strong, ritually prepared and "fixed" for you with special oils and herbs such as Indian tobacco, powdered High John root and lodestone grit. Write the intention of your work on a piece of paper and place it under the candle before lighting. Don't forget to sign it so that you are connected spiritually to the work.

Voodoo Mama's Conjure Candles will burn for approximately seven days or 120 hours. They can be reused once they have burned down as vases for holding flowers, turned into a container spell to keep on your altar or refilled with wax to burn again. They are simply too beautiful to throw away and the creative conjurer will find many possibilities for using the decorative glass container once the original wax has burned down. The exception to this is when the candle is burned for nefarious purposes. The remains should be thrown in a trash can away from your home or left at a crossroads with an offering.

Add to Cart
Get a free tarot reading from Lotus Tarot