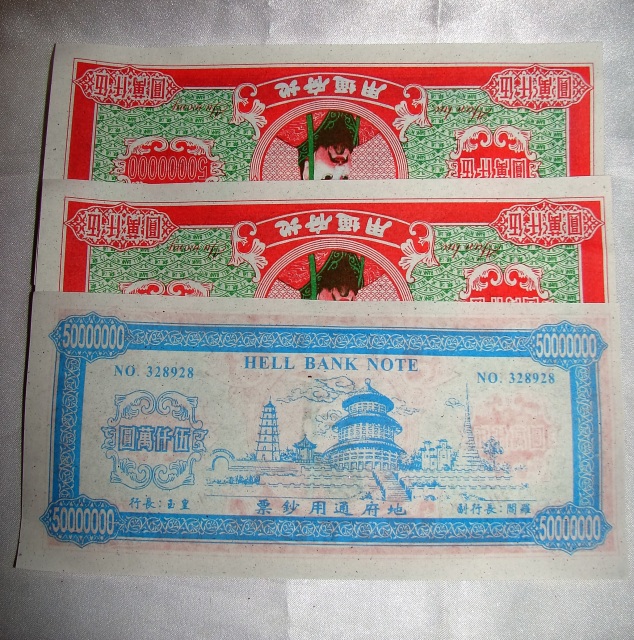 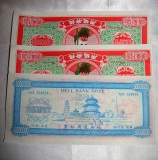 Hell bank notes are spirit money, made from joss paper, an afterlife monetary paper offering used in traditional Chinese ancestor veneration, that can be printed in the style of western or Chinese paper bank notes. Hell Bank Notes are known for their outrageously large denominations, ranging from $10,000, $100,000, $1,000,000 or even $500,000,000. In Singapore, it is extremely common to find 10 billion dollar banknotes in shops. On every bill, it features an image of the Jade Emperor, the presiding monarch of heaven in Taoism or some other famous figures in Chinese mythology, such as the Eight Immortals, the Buddha, Yama, or images of dragons. Some even portray famous people who are deceased, such as US President John F. Kennedy. On the back of each bill, it features a portrait of the bank of Hell.

In Chinese mythology, the name of hell does not carry a negative connotation. The hell they refer to is Di Yu meaning "underground hold/court". Diyu is a maze of underground levels and chambers where souls are taken to atone for their earthly sins. All who die will automatically enter the underworld of Diyu to be judged before either being sent to heaven, to be punished in the underworld, or to be reincarnated. As such, the word "Hell" usually appears on these notes. However, some printed notes omit the word "hell" and sometimes will replace it with "heaven" or "paradise". These particular bills are usually found in joss packs meant to be burned for Chinese deities.Hell money is spirit money and can be used in a number of ways. For example:

Price is for 12 different varieties of Hell Bank Notes.