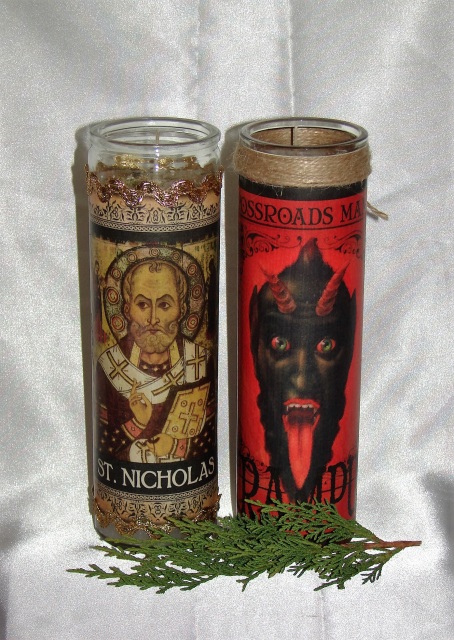 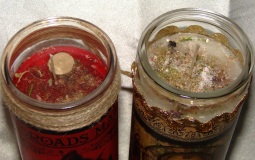 SKU: VMSN&K40
$45.00
$45.00
Unavailable
per item
Celebrate Yule with both St. Nicholas and Krampus with these beautiful handcrafted candles. Krampus, best known as the sidekick of St. Nicholas, is depicted on a red glass encased, seven day candle while St. Nicholas is on a white glass-encased candle, both fixed with aromatic herbs and oils that will burn for approximately 120 hours. Krampus is commonly referred to as the "darker" sidekick of Santa Claus because he essentially represents the polar opposite of St. Nicholas. In German folklore, Krampus is represented as a sort of Christmas devil complete with horns and cloven hooves. He wanders the streets in chains and bells punishing children who have misbehaved. Krampus Night or Krampusnacht  occurs on December 5th (the eve of the feast of St Nicholas) when he is offered fruit schnapps. While Santa dispenses gifts for the good children, Krampus is the bearer of coal and bundles of gold-painted birch twigs called Ruten bundles. Krampus is alleged to periodically swat children who have misbehaved with one of the longer twigs. Krampus presents Ruten bundles to families who leave them out as a reminder throughout the year for children to behave. Krampus is believed to have Pagan origins; though, his exact lineage is unclear. Some suggest he is the son of Hel in Norse mythology while others suggest he is similar to the satyrs and fauns of Greek mythology. Whatever his origins, he is a feared but beloved creature who adds a little chaos to the holiday mix.

St. Nicholas is the patron saint to children, students, sailors, fishermen, ships, sailing, mariners, merchants, bankers, scholars, travelers, bakers, pawnbrokers, prisoners, captives, brides, chemists, the hungry, the falsely accused, repentant thieves, archers, and pharmacists. Burn a St. Nicholas Fixed Altar Candle to petition St. Nicholas for justice, charity and love. In New Orleans, it is said that one must burn a candle when petitioning any saint in order to "wake them up" so they can hear your petition. This beautiful candle bears a Petition St. Nicholas on the back.

Voodoo Mama's Conjure Candles will burn for approximately seven days or 120 hours. They can be reused once they have burned down as vases for holding flowers, turned into a container spell to keep on your altar or refilled with wax to burn again. They are simply too beautiful to throw away and the creative conjurer will find many possibilities for using the decorative glass container once the original wax has burned down. The exception to this is when the candle is burned for nefarious purposes. The remains should be thrown in a trash can away from your home or left at a crossroads with an offering to the spirits that reside there.

*Be sure to check out my article Setting Lights on my blog for instructions and ideas for using any of my candles.
Add to Cart