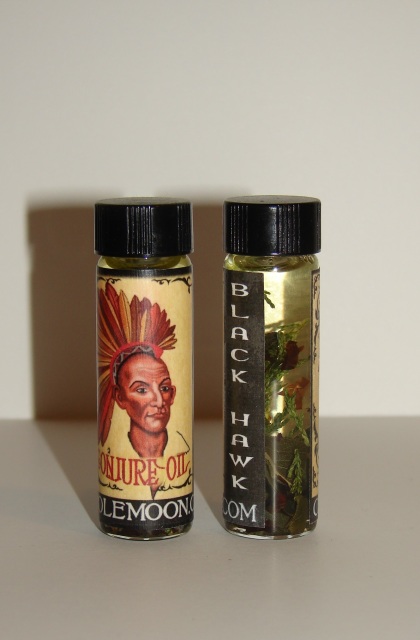 SKU: BHO1495
$14.95
$14.95
Unavailable
per item
His Indian name is Ma-ka-tai-me-she-kia-kiak, or Black Sparrow Hawk, and he was born in 1767 at Saukenuk, the principle city of the Sauk tribe located along the Rock River. Black Hawk was born into the Thunder clan. He chose to have only one wife, As-she-we-qua, or Singing Bird, although in Sauk culture polygamy was the norm. Black Hawk and Singing Bird had five children - two girls and three boys.

In the Spiritualist Churches, Black Hawk is considered a saint and served as an Indian Spirit Guide. In the Spiritualist tradition, anyone who is recognized as doing the work of the Creator is considered a saint, whether or not they have been officially canonized by the Catholic Church. In New Orleans Voudou, Black Hawk is called a Voudou saint by some practitioners and considered a loa by others. To contemporary Sauk and Fox Indians, he is honored as an ancestral spirit, as he is among Southern conjure workers and rootworkers.


Black Hawk can be offered peppermints and sweets, fruits, corn, tobacco, cedar and sage. Water is the best libation offering for him. In New Orleans, there is the old custom of offering him red beans and rice on Mondays and spaghetti and meatballs on Wednesdays. I am quite sure he would enjoy a bit of fry bread, if you are so inclined to make it. Check out my personal recipe in the section below.

Black Hawk Spiritual Oil draws on the gifts of the warrior Indian Spirit. Wear Voodoo Mama's Black Hawk Spiritual Oil as a personal anointing oil during ceremony and prayer and use to dress candles, talismans, and other ritual items when you wish to honor and connect to Black Hawk. Voodoo Mama's Black Hawk Spiritual Oil is handcrafted in small batches according to old-fashioned, time-honored traditions to retain the highest potency and fragrance of the ingredients. Each bottle contains pieces of roots and herbs sacred to Black Hawk that are gathered according to appropriate Native American spiritual protocol with offerings and prayers. This spiritual oil blend is 100% pure and additive free. 4 drams (.5 oz.). For external use only.