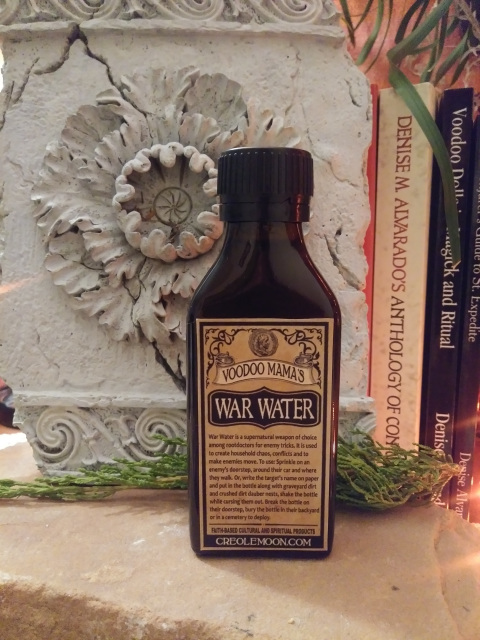 In traditional modern hoodoo, root workers employ War Water in foot track magick which causes poisoning through the feet. War Water is also purportedly used for creating household disharmony and chaos, making everyone in the household argue and fight one another. Originally, a bottle of war water would be hurled at the front door or porch of an enemy to cause disharmony and bad luck in the home. Nowadays, that could get you a terrorist charge, so stick to sprinkling it around your enemy's home and yard instead. War water can also be used as a curse reversal by sending malevolent energy back to its source.

Voodoo Mama's War Water is a proprietary blend based on a traditional New Orleans recipe available exclusively at Creole Moon. Among other things, it contains rusty nails, Spanish Moss and Creosote and smells to high heaven, as any powerful War Water should. Comes in a 100 ML amber glass oblong flask with black ribbed closure and tamper evident seal to prevent leakage. It also has a pouring insert for ease of sprinkling.

Voodoo Mama's Conjure Products are taking conjure to a whole new level and weare confident you will agree!