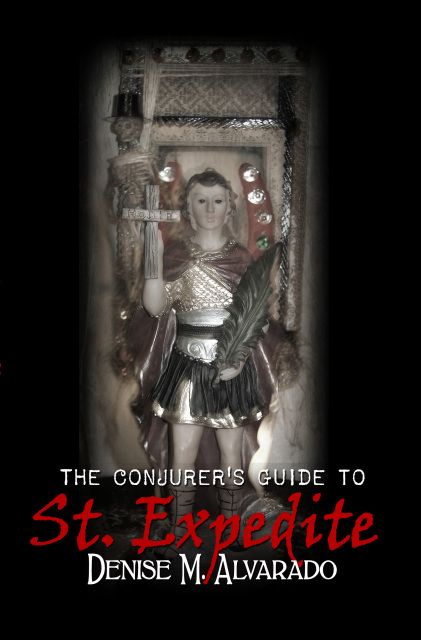 The Conjurer's Guide to St. Expedite

*Shipping is automatically upgraded to priority for books. If you just order books, you will receive a refund for the shipping cost difference if there is one.

He could quite possibly be the most effective unofficial saint of urban legend ever to have been discovered. For a variety of reasons, the Roman Catholic Church will not officially recognize St. Expedite; but, at the same time, they won’t discount him either. That’s because he’s just too damned popular. And, according to his devotees, he’s just that damned good. But that’s okay, New Orleans Voudou has no problem embracing St. Expedite as one of her patron saints. And hoodoos, rootworkers, conjure doctors, spiritualists and sorcerers appreciate his worth, as well. No officialities are needed in these camps. Because when a saint works as well—and more importantly, as quickly—as St. Expedite works, he is more than welcome in the wide world of conjure.

Indeed, St. Expedite is the go-to saint for fast solutions to problems of all kinds. His quick response makes him extremely popular among those who strive to put an end to procrastination and delays and to those who seek financial success. He is petitioned for prompt solutions to business problems and has recently been coined the Patron Saint of Nerds due to his association with computer programmers and hackers. St. Expedite is also known as one of the lawyers of impossible causes, and as such, is petitioned for court cases and legal issues, as well.

Written for the individual interested in the mystical and folk magic aspects of the Minute Saint - St. Expedite - this book delves into areas of his history and patronage never before found in one publication. This book contains more than the usual description, wordplay, prayers and suggested offerings of pound cake and public gratitude. A detailed description of where he is found around the world and how he fits into the various religiomagical landscapes, including contemporary cults of devotion and decapitation, Haitian Vodou expeditions and death conjure, individual and community relationships, and public and secret celebrations and workings are described. His origin stories, legend as a member of the Thundering Legion, and other presuppositions are explored. And, the campaign to denounce and erase any legitimacy associated with St. Expedite by the Catholic Church is presented as a curious quandary, given the multitudes of peoples across the globe who revere him and love him and swear by his legendary ability to fix problems with lightning speed.

An examination of references to St. Expedite or St. Espidee as he is referred to, in the Hyatt texts is also provided in this book. Many of the works are provided in contemporary language so it is easy to understand for the reader, while others are kept in their original transcriptions for historical value. Learn how informants petitioned him for court scrapes, banishing, road opening, getting a job and many other purposes. In addition, St. Expedite is discussed within the context of New Orleans Voudou as Baron Samedi, including his relationship to the Skull and Bones Gang and Mardi Gras, not as public celebration, but as the underlying Spirit who kicks off and drives the festival of decadence and debauchery.

This book provides details for working with St. Expedite within the context of folk Catholicism, hoodoo and New Orleans Voudou. From setting up an altar, to an obscure nine hour novena similar to the one developed by students in the Ursuline convent in the late 1700s, to many additional, original conjures never before revealed to the public will keep the modern conjurer busy for years to come as the problems of daily life inevitably present themselves again and again. For the first time ever, find all of the information available on St. Expedite, and then some, at your fingertips in this excellent reference book.