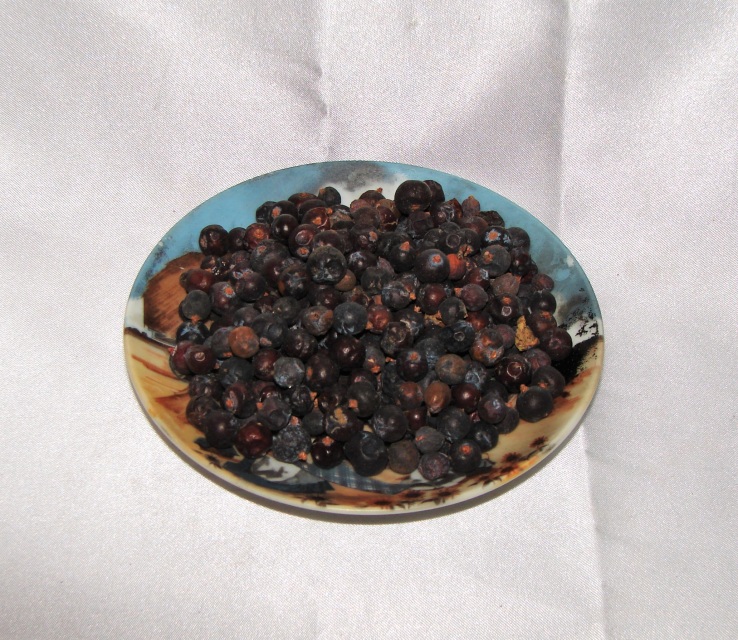 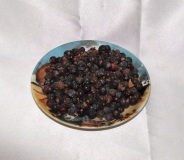 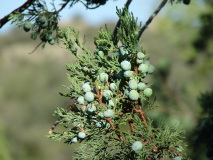 Overview
Wild-harvested from the beautiful Juniper trees in the high Desert of Arizona, these juniper berries make for the ideal addition to love and attraction mojos and gris gris, to enhance virility in men and sensuality in women.

The juniper is an evergreen tree native to Europe, Asia, and the northern parts of North America and it is especially abundant in central Texas and Eastern Oregon. Juniper berries are the female seed cones produced by the various species of juniper trees. They are not a true berry but a cone with unusually fleshy and merged scales, which give it a berry-like appearance.

Uses in Folk Magic
The first recorded use of juniper berries is in an Egyptian papyrus from 1500 B.C.E. Juniper was the symbol of the Canaanites fertility goddess Ashera. According to  Western European folklore, a juniper tree planted by the door to your home will prevent a witch from entering. Juniper incense has been used by the Scottish to ward off the evil eye and by the Tibetans to remove demons. The purple, blue, violet, or blackish-brown fruits are harvested in early autumn for culinary and medicinal use.

For educational purposes only. This information has not been evaluated by the Food and Drug Administration. This information is not intended to diagnose, treat, cure, or prevent any disease.
Sold out
Add to Cart
The information presented on the Creole Moon website is for informational purposes only. It is based on traditional folk usage, anecdotal reports, personal experience and scientific ethnographic research as cited in each article. The results reported may not necessarily occur in all individuals. Self-treatment is not recommended for life-threatening conditions that require medical treatment under a doctor's care.  Consult your doctor, practitioner, and/or pharmacist for any health or mental health problem and before using any herbs or before making any changes in prescribed medications. Creole Moon's Apothecary products are not intended for internal consumption and have not been evaluated by the FDA.

From A Modern Herbal, by Mrs. M. Grieve

The Juniper is a small shrub, 4 to 6 feet high, widely distributed throughout the Northern Hemisphere. It occurs freely on the slopes of the chalk downs near London, and on heathy, siliceous soils where a little lime occurs. It is a common shrub where bands of limestone occur, as on some of the Scotch mountains and on the limestone hills in the Lake district.

The berries are used for the production of the volatile oil which is a prime ingredient in Geneva or Hollands Gin, upon which its flavor and diuretic properties depend.

History
Although these valuable berries are produced from a native shrub, the berries of commerce are chiefly collected from plants cultivated in Hungary. The oil distilled on the Continent, principally in Hungary, is chiefly from freshly-picked berries. It has, hitherto, not been possible to produce the oil competitively with Southern Europe because of the relative cheapness of labour and the vast tracts of land over which the trees grow wild. But the rise in the price of foreign oil of Juniper berries since the outbreak of war has directed attention to the possible extended production of the oil either in Great Britain or her northern colonies. Sunny slopes are likely to be the best places to cultivate the shrub for the berries. The yield of oil, however, varies considerably in different years.

There is a wide difference in the chemical and physical characters of the oil distilled on the Continent from fresh and that in England from imported berries, which in transit to this country have become partially dried.

Commercial oil of Juniper is obtained chiefly from the ripe fruit and is stated to be in all essential qualities superior to the oil of Juniper from the full-grown, unripe, green berries used medicinally, which occurs as a colourless or pale greenish-yellow, limpid liquid, possessing a peculiar terebinthic odour when fresh, and a balsamic, burning, somewhat bitter taste.

Juniper berries take two or three years to ripen, so that blue and green berries occur on the same plant. Only the blue, ripe berries are here picked. When collected in baskets or sacks, they are laid out on shelves to dry a little, during which process they lose some of the blue bloom and develop the blackish colour seen in commerce.

There is a considerable demand on the Continent for an aqueous extract of the berries called Roob, or Rob of Juniper, and the distilled oil is in this case a by-product, the berries being first crushed and macerated with water and then distilled with water and the residue in the still evaporated to a soft consistence. Much of the oil met with in commerce is obtained as a by-product in the manufacture of gin and similar products.

In Sweden a beer is made that is regarded as a healthy drink. In hot countries the tree yields by incision a gum or varnish.

Constituents
The principal constituent is the volatile oil, with resin, sugar, gum, water, lignin, wax and salines. The oil is most abundant just before the perfect ripeness and darkening of the fruit, when it changes to resin. The quantity varies from 2.34 to 0.31 per cent Juniper Camphor is also present, its melting-point being 1.65 to 1.66 degrees C.

Adulteration by oil of Turpentine can be recognized by the lowering of the specific gravity. The tar is soluble in Turpentine oil, but not in 95 per cent acetic acid. Junol is the trade name of a hydroalcoholic extract.

Medicinal Actions and Uses
Oil of Juniper is given as a diuretic, stomachic, and carminative in indigestion, flatulence, and diseases of the kidney and bladder. The oil mixed with lard is also used in veterinary practice as an application to exposed wounds and prevents irritation from flies.

Spirit of Juniper has properties resembling Oil of Turpentine: it is employed as a stimulating diuretic in cardiac and hepatic dropsy.

The fruit is readily eaten by most animals, especially sheep, and is said to prevent and cure dropsy in the latter.

The chief use of Juniper is as an adjuvant to diuretics in dropsy depending on heart, liver or kidney disease. It imparts a violet odour to the urine, and large doses may cause irritation to the passages. An infusion of 1 oz. to 1 pint of boiling water may be taken in the course of twenty-four hours.

In France the berries have been used in chest complaints and in leucorrhoea, blenorrhoea, scrofula, etc. They are nut given in substance.

The oil is a local stimulant.

Other Species
Gum Juniper is a name of Sandarac, theresinous product of Thuja articulata or Callitris quadrivalvis.

From dry distillation of the branches and heartwood of Juniperus oxycedrus, the Prickly Cedar or Medlar Tree, a large shrub, 10 to 12 feet high, with brownish-black berries the size of a hazel nut, native of the south of France, and occasionally from that of J. communis, is obtained the tarry, empyreumatic oil known as Cade Oil, or Juniper Tar Oil, used in the treatment of the cutaneous diseases of animals in France and other Continental countries, and for most of the purposes of Oil of Turpentine. It is a readysolvent for chemical drugs and is used externally for chronic eczema as oil, ointment, and soap.

J. virginiana, the American Juniper of Bermuda, known also as Red Cedar and Pencil Cedar, is only an ornamental tree in Britain, introduced in 1864, and growing 40 to 50 feet high. The smallness of the stem and slowness of growth render it unsuitable for planting here with a view to profit, but in America it is much used for cabinet-making, turnery etc. The interior wood is of a reddish colour and highly valued on account of its great durability, being suitable for exposure to all weather. The highly-coloured and fragrant heartwood is largely used in the manufacture of the wood coverings of blacklead pencils, and also for pails, tubs, and various household utensils subjected to wettings. Boxes made of the wood are useful for the preservation of woollens and furs, it being an excellent insectifuge on account of the oil contained in it.

Red Cedar Oil is an article of commerce, obtained from the wood by distillation from the chips and waste wood, from 15,000 to 20,000 lb. of oil being annually produced in the United States. It is used in the preparation of insecticides and also in making liniments and other medicinal preparations and perfumed soaps. It is used generally in perfumery and was formerly one of the principal constituents of the popular Extract of White Rose.

The berries in decoction are diaphoretic and emmenagogue, like those of Common Juniper, and the leaves have diuretic properties.