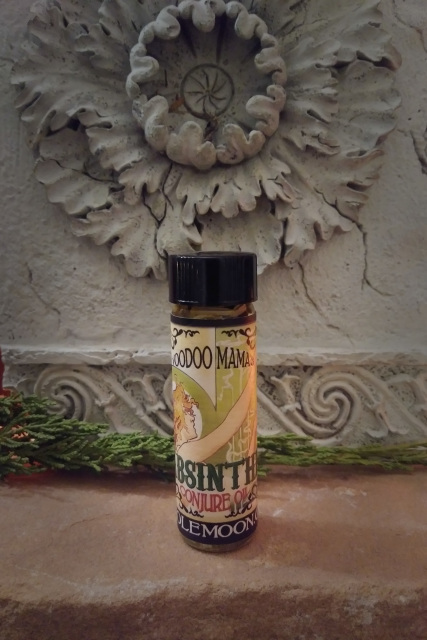 Add to Cart
<
>
Absinthe is inspired by a potent alcoholic beverage made from select herbs and a large percentage of the purest alcohol. In French, the word "absinthe" means "wormwood." Accounts in ancient texts date as far as 1500 B.C. mention wormwood's medicinal as well as religious significance. The original recipe was simply wormwood leaves soaked in wine. This oil is useful for enhancing  psychic visions and mediumship abilities, or anytime you wish to enter an altered state of consciousness.

This oil goes through a precise and complex baptismal rite to awaken the spiritual essence of the botanicals, and the price reflects this timely and delicate creative process. Read all about the process in the article below.

Our authentic anointing oils are handcrafted in small batches according to old-fashioned, time-honored Southern traditions using only the highest quality herbs and raw ingredients available. This process ensures oils of the highest potency and fragrance. For external use only. Four drams (.5 oz). 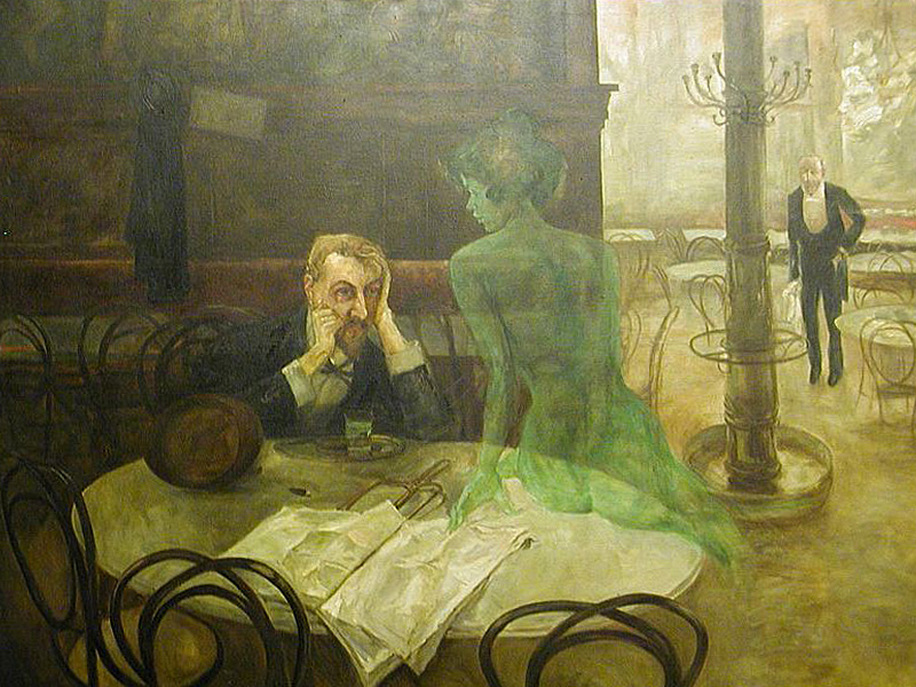 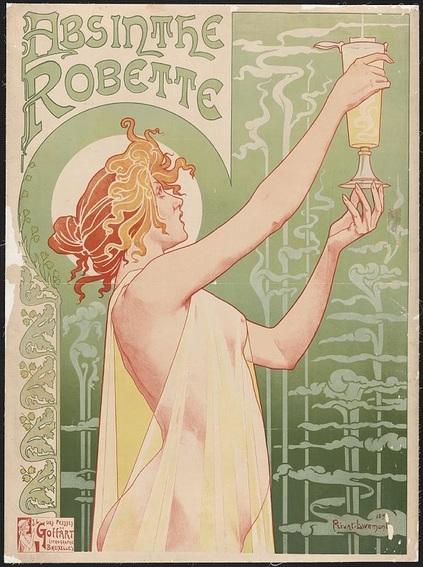 Absinthe Robette by T. Privat-Livemont, 1896. This work is in the public domain in the United States because it was published (or registered with the U.S. Copyright Office) before January 1, 1923.
Absinthe is a potent alcoholic beverage made from select herbs and a large percentage of the purest alcohol. In French, the word "absinthe" means "wormwood." Accounts in ancient texts date as far as 1500 B.C. mention wormwood's medicinal as well as religious significance. The original recipe was simply wormwood leaves soaked in wine.

Absinthe was also known as the "Green Fairy" during its heyday in France in the 1800s. The Green Fairy is the English translation of La Fee Verte, the French nickname given to absinthe in the 19th century. The nickname stuck, and over a century later, “absinthe", "Green Fairy", “Green Goddess”, and “Madness in a Bottle” are some of the names that continue to be used.

According to some accounts, absinthe was first formulated in the 1790s by Dr. Pierre Ordinaire, a French doctor living in Switzerland. He made it by combining wormwood with other herbs such as hyssop, coriander, anise, and melissa, with 68% alcohol. He created the amazing elixir to treat his patients and patented it as a “cure-all”, guaranteed to heal what ails you.

The legacy of absinthe as a mystifying, addictive, and mind-altering elixir continues to this day. Absinthe has been largely and incorrectly portrayed in fine art, music, literature and the media as an unnaturally glowing green liquid that causes over-the-top hallucinations and madness.

Absinthe is an anise-flavored liquor or spirit that is made by steeping wormwood (wormwood has been defined as the quinine of the poor) and other aromatic herbs (hyssop, lemon balm, and angelica) in alcohol. The drink is distinguished by its dazzling emerald blue-green clarity, due to its chlorophyll content. When mixed with water, the liquor changes to cloudy white. Absinthe drinking was exported to New Orleans and its French Quarter, where the Old Absinthe House has been a tourist attraction for more than a century. Absinthe appeared in New Orleans liquor advertisements as early as 1837, but its popularity didn't take off until the latter half of the 19th century with the opening of the barroom that would become the Old Absinthe House in 1874.

The classic French absinthe ritual involves placing a sugar cube on a flat perforated spoon, which rests on the rim of the glass containing a measure or “dose” of absinthe. Iced water is then very  slowly dripped on to the sugar cube, which gradually dissolves and drips, along with the water, into the absinthe, causing the green liquor to louche (“loosh”) into an opaque opalescent white as the essential oils precipitate out of the alcoholic solution. Usually three to four parts water are added to one part of 68% absinthe (The Virtual Absinthe Museum, 2002-2008).

In the Czech Republic they have a different absinthe drinking ritual, which is not recommended. They set it up similar to the traditional way with a slotted spoon and sugar cubes, except they soak the sugar directly in the absinthe, then set it on the spoon and put a match to it. The absinthe in the glass, and the sugar, both ignite and the sugar melts and drips down into the glass. The remnants of the cube are eventually dropped into the absinthe and the fire is blown out. The warm absinthe is now ready to drink. This method of absinthe preparation is obviously dangerous, and again is not recommended (Earl, 2008)

Aleister Crowley wrote about the spiritual/metaphysical function of water in the making of absinthe in 1917:

"Here, too are marble basins hollowed—and hallowed!--by the drippings of the water which creates by baptism the new spirit of absinthe."

Absinthe conjure oil is used to enhance psychic visions and create unusual spiritual clarity and heightened clarity of mind and vision. This oil will also produce vivid dreams and is a powerful aphrodisiac.

Like the absinthe ritual for creating the beverage, conjuring the magickal oil also involves a ritual of baptizing the spirit of absinthe into being. Make sure your herbs are fresh and green, though dried. This is extremely important for the final product.

If you are adventurous and would like to make your own Green Fairy Oil, I am about to tell you how to do it. Should you undertake the creation of this oil, you will gain a full appreciation for the kind of care and skill that goes into the making of all of my spiritual oils, ritual oils and conjure perfume oils. Of course, I do not share the secrets of all of my magickal products, so consider this a gift from me to you.

Don't be discouraged if it doesn't come out quite right after the first or third try. This technique combines the ancient arts of apothecary, perfumery AND conjure and it is not something that is either simple or quickly learned. Take your time, gather the freshest ingredients possible, and get into the conjuring mindset. The whole process for making Green Fairy Oil according to this method takes several weeks.

Herbs:
Essential Oils:
Additional ingredients:
If you have gathered your own wormwood, your will need to strip the leaves from the stems because you only want to use the leaves. Combine all of the herbs in a mortar. Gently macerate the herbs together until they are well mixed and the fragrance is strong. Pour a quantity of base alcohol in a copper pot and dilute with distilled water to about 85%. Add the herb mix and allow to steep in the alcohol over night. In the morning, add a little more water and heat over the stove on low heat for about an hour. Keep the pot covered, and periodically stir the mixture and collect the condensation from the lid of the pot into a little vial. Take off of the stove and allow the liquid to cool. Strain the alcohol out of the herbs and do a second maceration with the artemesia, hyssop, and lemon balm using about half of the strained liquid. You can either add the herbs in loose, or put them in a tea bag to make the straining process easier later. Warm over the stove until hot but do not allow it to boil. Remove the mixture from the stove and allow it to cool. This mixture should be a bright emerald green if your herbs are fresh. Strain the liquid again. Filter through cheesecloth into a clear glass bottle until clear of herbs and sediment. Add the first liquid to the bottle and cover tightly.

Allow this mixture to sit for a couple of weeks to allow all of the fine sediment to settle to the bottom of the container. When the liquid appears very clear, you are ready to make your smaller bottles of Absinthe Conjure Oils.

For a one dram bottle of Absinthe Conjure Oil, take about 10 full droppers of the Green Fairy liquid and put into a bowl. Add one full dropper of each of the oil of Wormwood and the anise essential oil. To this, add about half a dropper full of peppermint. Gently stir the oils and liquid. Now, fill your smaller dram bottle about 3/4 of the way full with the Green Fairy liquid.  Place a funnel into the top of the smaller bottle and put a sugar cube into the funnel, so that the distilled water you will add has to pass through the sugar. This is the actual baptismal rite of the Green Fairy spirit. Using an eye dropper, slowly add the distilled water, drop by drop, on the sugar cube until the bottle is full. The final mixture should be a milky green if done correctly.

You should have enough extra absinthe elixir to last a long, long time. It will not go bad so long as you store it in a cool dark place, in a dark amber bottle (or other dark colored glass). Do not refrigerate your absinthe elixir because some of the chemical constituents may crystallize and may not remix with the other ingredients when it reaches room temperature.

Most folks who make the Green Fairy conjure oil will simply blend the essential oils in a base of grapeseed oil, perhaps with a sprig of wormwood added to the bottle. This is certainly a less complicated method. However,  as you can imagine, the effect is not nearly the same on a magickal level. You don't have the intimate relationship with the herbs, the same kind of intensity of intent from the whole process, and you don't have the baptism of the spirit of absinthe. The technique I have described here is really is a fabulous process and you will feel ecstatic when you get it right.

The base absinthe formula is a vintage recipe for the absinthe brew and so it can technically be drunk as an alcoholic beverage. Please exercise caution when consuming absinthe as it is an extremely powerful Spirit.

More Information about Absinthe in General

The Art Of Drinking Absinthe, The Liquor Of Aesthetes
There's something romantic about absinthe — that naturally green liquor derived from wormwood and herbs like anise or fennel. Vincent Van Gogh and Oscar Wilde drank it. Henri de Toulouse-Lautrec and Pablo Picasso filled the glasses of cafe patrons with absinthe in their paintings. Absinthe was a drink of aesthetes....

Absinthe
Vincent van Gogh shot himself on the afternoon of July 27, 1890, in Auvers-sur-Oise, France; he died in the early morning two days later. Paul F. Gachet, the doctor who attended van Gogh during the last two months of his life, planted a thuja tree on the artist’s grave. The gesture was probably inspired by van Gogh’s admiration of thuja trees and his inclusion of their flamelike images in some of his Auvers paintings....

The Mystery of the Green Menace
At first, Ted Breaux dismissed the urgent warnings on TV and radio. He even ignored the sirens that started blaring Saturday afternoon. "The last two times they evacuated the city, I stayed," says Breaux, 39, a chemist and environmental microbiologist. But when he woke up on Sunday, August 28, the hurricane had become a Category 5 and was still bearing down on New Orleans. He decided it was time to get out of his house on the floodplain just south of Lake Pontchartrain. He packed his Mitsubishi Lancer Evolution with all the essentials: clothes, toiletries, a laptop, some World War II rifles, ammo, and $15,000 worth of absinthe.