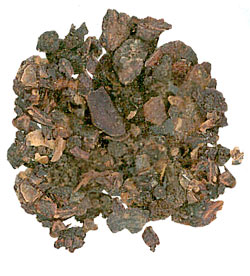 Myrrh, Commiphora myrrha, is an ancient spiritual incense and fumigant that comes as a resin in pieces. Traditionally burned as incense and used in perfumery formulations, it has been used for thousands of years for protection, blessing, consecration, cleansing, purification, peaceful home, intensifying concentration, summoning spirits. Ancient Egyptians used myrrh as part of the mummification process, while the Chinese used myrrh medicinally. Myrrh is, in fact, still used medicinally as an antiseptic, anesthetic, antiparasitic, antitumor, antioxidant, as well as for healing wounds. It is often mixed with frankincense and typically burned over charcoal tablets in a fireproof container. Approximately 1 oz.