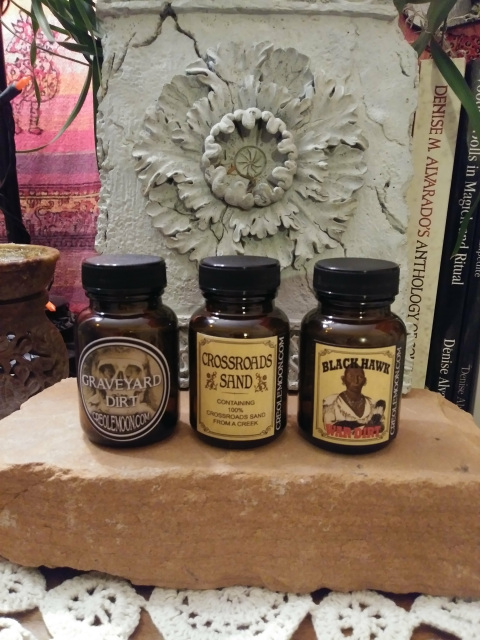 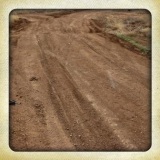 Crossroads magic is common in conjure, rootwork, and hoodoo. In conjure practice, it is said that in order to acquire talent in a particular skill such as playing a musical instrument, throwing dice, or dancing, one may go to a crossroads a certain number of times, either at midnight or just before dawn, and one will meet a "black man," presumably Papa Legba; though, often mistaken for the Devil, who will bestow upon one the desired skills….for a price, of course.

Voodoo Mama's Crossroads Dirt draws on the gifts of the Spirits of the crossroads for power, decision-making and opportunity. This dirt is hand collected from the high desert in Arizona, from several different locations, the images shown are just two of those locations. The color of the dirt you receive will vary according to the region in which it was collected. Can be used in mojo hands, gris gris, powders and to stuff doll babies and fix candles.

Bring the power of the crossroads into your work with Voodoo Mama's authentic Crossroads Dirt. As with all of our products, our Crossroads Dirt is hand collected according to longstanding New Orleans tradition. 2.75 oz

*Sold as a mineral sample and intended for historical, cultural, scientific and educational purposes.

About the CROSSROADS in Hoodoo and Conjure

A deal with the Devil at the crossroads is a widespread cultural motif that sparks vivid images of greedy and desperate people selling their souls in exchange for diabolical favors of youth, wealth, knowledge and power. Walking to a dirt crossroads less traveled at midnight, those with enough courage (or desperation) wait for the black man to appear, and with a roll of the dice, a toss of some coins, or the exchange of one's soul - they are willing to pay any price in exchange for the ever-coveted fame, fortune and talent.

In the folk magic of many cultures, the crossroads is a location where two realms touch and thus represents a place "between worlds" or “neither here nor there” As such, the crossroads is a site where supernatural spirits can be contacted and paranormal events can take place. Crossroads magic is particularly pronounced in conjure, rootwork, and hoodoo. In conjure practice, it is said that in order to acquire talent in a particular skill such as playing a musical instrument, throwing dice, or dancing, one may go to a crossroads a certain number of times, either at midnight or just before dawn, and one will meet a "black man," presumably Papa Legba; though, often mistaken for the Devil, who will bestow upon one the desired skills….for a price, of course.

Making a pact with the Devil, or the well-known Faustian bargain is widespread wherever the Devil is vividly present. It is most familiar in the legend of Faust and the figure of Mephistopheles, but elemental to many Christian folktales. According to traditional Christian belief in witchcraft, the pact is between a person and Satan or any other demon (or demons); the person offers his or her soul in exchange for diabolical favors. Those favors vary by the tale, but tend to include youth, knowledge, wealth, or power. It was also believed that some persons made this type of pact just as a sign of recognizing the Devil as their master, in exchange for nothing. Regardless, the bargain is a dangerous one, for the price of the Fiend's service is the wagerer's soul. The tale may have a moralizing end, with eternal damnation for the foolhardy venturer. Conversely it may have a comic twist, in which a wily peasant outwits the Devil, characteristically on a technical point.

Well, that's the Christian version of the crossroads legend. In Voodoo, the legend involves the Guardian of the Crossroads, Papa Legba who is petitioned for favors. Papa Legba is not the devil, however. In fact, there is no devil in the Voodoo pantheon.

In the African-derived traditions, Papa Legba, Ellegua, and Exu are the Spirits of the crossroads. All of these manifestations of the crossroads spirits serve a similar role in that they act as intermediaries between the divine spirits and humans. They stand at the spiritual crossroads and give or deny permission to speak with the spirits of Guinee, and are believed to speak all human languages.

The crossroads play a prominent role in Voodoo and hoodoo. Not only is it the place where one can petition Legba and interact with the various loas, it is the place where ritual remains are left, the place where leftover water from spiritual baths are disposed of, the place where cursed objects can be nullified, and where any number of spells can be performed.